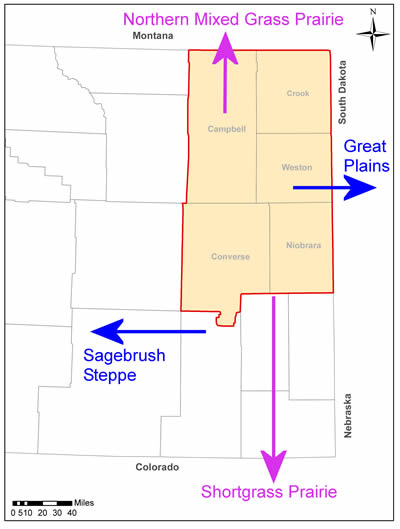 The majority of the five county area is comprised of high plains and is part of the unglaciated Missouri Plateau subregion of the Great Plains province. The Thunder Basin is a local designation for a portion of the Powder River Basin, which is both a geologic structural and a topographic drainage basin.

The area is characterized by open high hills and sagebrush-grassland tablelands having intermittent escarpments. Many hills are bisected by drainages that create moderate variations in local relief.  Internally drained playas are common, as are buttes and plateaus capped by sandstone or porcelanite clinker (baked and fused rock resulting from in-place burning of coal deposits during the prehistoric era). Elevations throughout the area range from less than 3,200 feet to more than 6,400 feet above mean sea level. The major river valleys have wide, flat floors and broad floodplains. The drainages bisecting the basin are incised and typically are intermittent (do not flow year-round) or ephemeral (respond only to rainfall or snowmelt events) and, thus, do not provide year-round water sources.

Climate is typical of a semi-arid, high plains steppe environment with large variations in temperature from summer to winter. Recurring periods of extended drought, sometimes lasting several years, are not unusual. Sunshine dominates approximately 60% of winter days and about 75% of summer days. Spring and summer are the wettest months, although rainfall amounts are highly variable and can be very localized. The area is quite windy, with frequent periods of sustained winds from 30 to 40 miles per hour (mph) and gusts exceeding 60 mph are not unusual. The low relative humidity, high percentage of sunshine, and high average winds all contribute to a high rate of evaporation across the area.

This landscape contains intermingled mixed and short-grass prairies and sagebrush ecosystems that support numerous species of concern. It is ecologically important because of its transitional location between major ecologic regions. It intermingles characteristics of the true mixed grass prairies to the north, the Great Plains to the east, the shortgrass prairie to the south, and the true sagebrush steppe to the west.

Ranching and energy development dominate both land use and local economies within the five county area. Approximate 87% of the land is held in private or state ownership. The remaining 13% is owned by the federal government and is overseen by several federal agencies.  Approximately 87% is in use as rangeland, with only 3% used for crop production.

The land is also rich in coal, oil, and natural gas reserves. Significant development of these reserves has been in process for decades, and will continue for the foreseeable future. The Gillette Coalfield may contain another 77 billion tons of recoverable coal. Current development of oil and natural gas reserves in the Niobrara Shale has escalated rapidly since 2010 and is expected to continue for decades as well. Uranium, bentonite, and clinker are also mined here.

This email address is being protected from spambots. You need JavaScript enabled to view it.
www.tbgpea.org